The Holodomor is the name given to the genocide by famine that occurred in Ukraine from 1932 to 1933. Millions of Ukrainians perished as victims of a man-made famine under Joseph Stalin’s regime, with 25,000 dying each day at the peak of the famine.

The Toronto Branch of the Ukrainian Canadian Congress has obtained approval of a treed area at Exhibition Place from the City of Toronto as the site for the location of a Holodomor Memorial. The objectives of the Holodomor Memorial Project in Toronto are:

Make a donation at tufoundation.ca/holodomor/

The proposed concept for the Holodomor Memorial shows a central position for the iconic sculpture “Bitter Memories of Childhood” by the Ukrainian artist Petro Drozdowsky. The status is approximately 5’0” high and it is preferred that it be kept at a fairly low relationship to grade for everyone’s accessibility and the greatest effect of the work. This work is a key element that is shared with other Holodomor Memorials around the world, and is sited in a prime location that allows for framed views in many directions. The primary site will have the sculpture facing toward the Princes’ Gates at Exhibition Place, with a modest paved dais oriented towards Canada Boulevard, framed by planting and a low seating wall. A light trellis for shade may also form a part of the memorial. 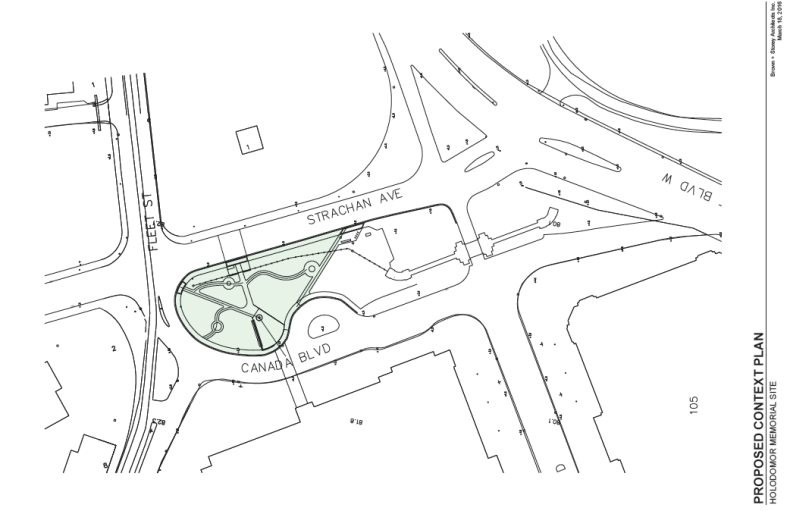 Pathways leading from three different entry points along Strachan Ave. are suggested. In order to draw people in to learn more about the Holodomor, with views through the existing trees towards the central figure. Three small ‘satellite’ gardens are suggested as places to pause along these pathways, creating a contemplative narrative where the other important symbols of the Holodomor will be expressed in low relief elements.

These elements would include the broken millstones, in contemporary and effective ways to give cultural support to (and not to overwhelm) the “Bitter Memories of Childhood.” The expression of these symbols and their gardens will be developed with the Ukrainian community, the CNE Board, and the City of Toronto over the next several months to create contemplative spaces that lead to the gathering place of the Monument. The siting of the monument would allow for those special occasions where there will be many people, and work well when there are only a few visitors learning about the Holodomor.

The entrances to the Memorial can be made through the existing metal fence where the pathways connect to the Strachan Avenue sidewalks, with gates that can be closed when required for the Exhibition events. Lighting focused at low levels will be provided to accentuate the Memorial dais.

We are also suggesting that the Holodomor Memorial Parkette could also feature amenities for pedestrians and cyclists who are using the bike path along Strachan Avenue and the Martin Goodman Trail at the waterfront nearby. This is suggested as a zone to the north of the Prince’s Gates Plaza beyond the existing grove of conifers, providing a water fountain, bike parking rings and low bench, connecting to a pathway that leads to the bus stop at the lay-by at Canada Boulevard and ultimately to the Memorial. This pedestrian and cycling amenity is seen as something that can benefit visitors to the Exhibition grounds, while deferring to the main focus of the Princes’ Gates Plaza. It is also suggested as a draw for people who would pause and perhaps notice the pathway leading to the Holodomor Memorial and be drawn in to learn something they didn’t know before. 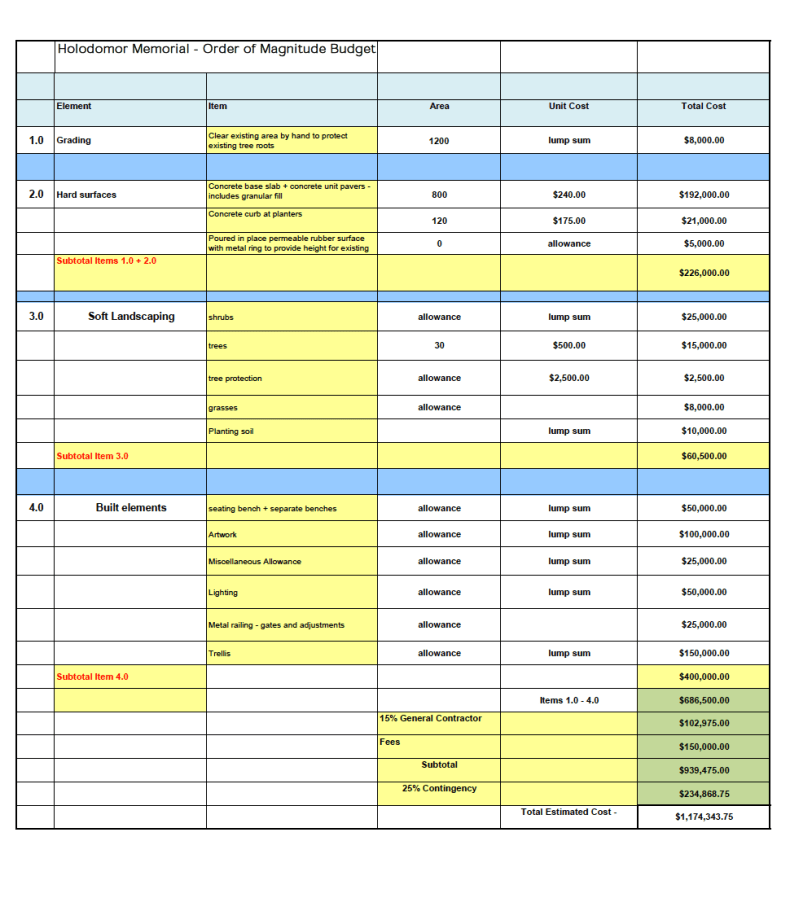 The construction budget will be adjusted once design and detailed working drawings will be completed.

Another $500,000 will be needed for the educational and maintenance components of the Memorial.

Your support is needed to make this project a reality.

Donations may be made online via the Toronto Ukrainian Foundation.

Cheque donations may also be made. Please make cheques payable to Toronto Ukrainian Foundation, and mail them to the address below. A tax receipt will be provided.